When Philip Roth, the novelist who wrote about Jewish life and male sexual identity, died May 22, 2018, at age 85, we recalled a headline he inspired many years earlier.

Stockton, California, residents with homes along a major waterway said they were annoyed by loud sounds emanating from increased cargo ship dock activity nearby. They even sued. 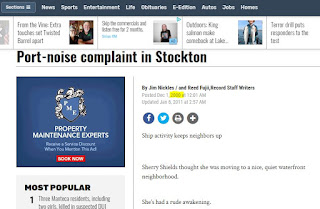 By the way, a judge dismissed the suit in September 2002.


Posted by Jilted Journalists at 1:40 PM