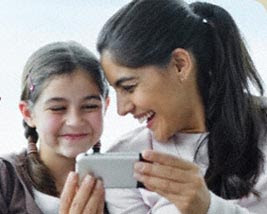 We knew this was coming, in case you hadn't seen, it's here.


And if you sign up now to download the free, "fast and easy" eReader, they throw in 6 free ebooks for iPhone and PC users: The Last of the Mohicans, Sense and Sensibility, Little Women, Dracula, Pride and Prejudice, and a handy Pocket Dictionary.

An example of pricing: The House at Sugar Beachby Helene Cooper, $9.99 on ereader, $25 list. (Their links.)

Just an example of how publishing changes so rapidly.

If only newspapers could get their $9.99 from customers who could download e-editions.
People may not be paying for stories, but they may pay for convenient delivery.
Pipeline owners often (ok, El Paso Gas, not always) make more money than the products they deliver.

Posted by Jilted Journalists at 7:18 PM No comments: 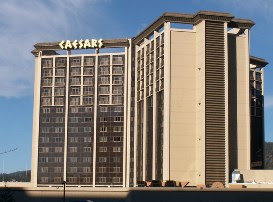 Have you ever noticed how the Caesars in Caesars Palace has no apostrophe in it?
(Waxing nostalgic:) It was a detail that escaped us way back in 1979 at Lake Tahoe.
Back then, Harrah's and Caesars were rivals. Back then, there was a Harrah, Bill, and he owned the poshest hotel-casino at Tahoe's south shore. Across the street, Highway 50, was another rival, Harvey's Wagon Wheel, owned by Harvey Gross. The names of Harrah's and Harvey's casinos each had an "apostrophe s" in them, Bill and Harvey owned them back then.
Along comes Halloween night of 1979. At the stroke of midnight, Caesars, without an apostrophe, would take over the Park Tahoe hotel-casino, a couple doors down from Harrah's and across from the fourth major club, Sahara Tahoe. We were there to witness the changeover as a reporter for what was then the Tahoe Daily Tribune. Gaming pretty much never stops and we chronicled how one hand at a blackjack table was the last dealt under the Park Tahoe's auspices, a tray of chips was quickly subbed and the very next hand was dealt under Caesars ownership. (Caesars lost, but the player's streak only lasted three hands.) And so it went table by table, watched by officials from Del Webb, which operated Park Tahoe's casino, Caesars, and Park Cattle Company, owner of the land on which the hotel-casino sat.
The Tribune then was a 5-day, afternoon daily. So the Nov. 1 edition carried our front-page story of the changeover under the headline, "Caesar's comes to Tahoe."
A couple days later comes the letter from the Caesars PR department, thanking us for the story but pointing out the ghastly error of the apostrophe. There is no apostrophe, the PR folks stress, because all their customers are Caesars, to be treated and honored like rulers of their own gaming empire (the fate of the namesake Roman emperor notwithstanding).
(Getting to the point:) Caesars no longer operates at Tahoe, it's part of the same company that also includes Harrah's and Harveys (no longer boasting an apostrophe in its logo) and seven other familiar hotel-casino brands. The Tahoe Daily Tribune is no longer daily. We no longer work for any newspaper, but we publish stories at Jilted Journalists and blog for free here.
In looking at the parallel upheavals in the newspaper and book-publishing industries, we can see more parallels in the way changing technology, industry consolidation, a deep recession and changing customer habits conspire against traditional casino operations just as they do the news and book industries and so many other businesses.
In the news and book publishing worlds, more readers are rising to be Caesars.
They can choose their experiences, they can publish their own stories from Tweets to treatises more inexpensively than ever before, and in doing so they build their own personal brands of themselves.
What can we deal them?
Place your bets, ladies and gentlemen.
Posted by Jilted Journalists at 9:41 AM No comments:

Bastille Day and The Fourth Estate 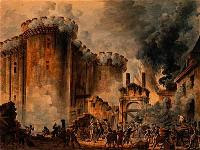 How can we let Bastille Day, July 14, pass without examining the future of "The Fourth Estate?"

As we mark the 225th anniversary of the storming of the Bastille, heads still figuratively roll as more media companies place jobs under the blades of corporate guillotines.

Coming to terms
"The Fourth Estate" as we think of it today is a phrase invented in England but likely rooted in French history.

In France, King Philip IV in 1302 convened the Estates-General triad of clergy, nobility and commoners. His deal: They would approve new taxes, he would grant them more freedom. The Estates-General was active at first and then went dormant.

Along came 1789, a financial crisis, the guillotine, King Louis XVI and Marie-Antoinette, a reconvening of the Estates-General, distribution of the U.S. Constitution articles, and a commoner-led revolution.

Later in England the three estates were parallel, The Lords Spiritual, The Lords Temporal (together making up the House of Lords) and the commoners (The House of Commons).

It was also in England where the term The Fourth Estate as applied to journalism stuck.

Author Thomas Carlyle in 1849 credits politician Edmund Burke, who likely was thinking about French history: "Burke said that there were three Estates in Parliament, but in the Reporters Gallery yonder, there sat a fourth Estate more important far than they all."

British politician and historian Thomas Babington Macaulay is quoted this way: "The gallery in which the reporters sit has become a fourth estate of the realm."

Even in a more egalitarian America, the term is often applied to the news media because of its government watchdog role, a de facto regulator.

Coming to termination
Under a generations-old business model, those who rule news media "tax" advertisers to underwrite much of their operations.

It worked in newspapers, later for over-the-air broadcasts. And cable.

The model held for so long that those who ruled the media could not fathom transformative technology and the quickening pace of change.

"Taxed" advertisers have gained more and more freedom to say what they want and where they want to say it. Increasing online and mobile advertising dollars flow more to Google, Facebook and Twitter rather than to news sites.

Control over news creation spread to "commoners," too.

In theory, anyone can say anything. Anyone can be a citizen journalist.

Just about anyone can start a blog. We can open Facebook, Twitter, Tumblr, Pinterest, Google+ or other accounts. We  tweet, text, sext or toss in our two cents in a Web site's story comments. Despite the fees to access wireless networks and set up home wi-fi, it all comes at a much lower cost for "commoners" who don't need to tax advertisers to get their "jobs" done and their "news" delivered to friends, foes, frenemies and other followers of all sorts -- even if only at 140 characters at a time.

Thousands of traditional "Fourth Estate" jobs are perishing never to return in the forms we once knew them. Pew estimates newspaper and magazine newsrooms chopped 54,200 journalism jobs in the past decade, offset by the creation of only 5,000 internet-based news jobs.

But don't let anyone get too complacent. There are more revolutions ahead.

Even the guillotine fell out of favor.
Posted by Jilted Journalists at 10:07 AM 2 comments:

Anything unusual help spur your drive to become a journalist?

"The tools of conquest do not necessarily come with bombs and explosions and fallout. There are weapons that are simply thoughts, attitudes, prejudices, to be found only in the minds of men. For the record: prejudices can kill, and suspicion can destroy, and the thoughtless, frightened search for a scapegoat has a fallout all of its own, for the children and the children yet unborn. And the pity of it is... that these things cannot be confined... to The Twilight Zone."

Wishing everyone a happy Fourth of July holiday.
Jilted Journalists is a site for sore eyes when your newspaper has or is about to declare independence from you.
Hope we can all help each other.
With about 1,400 more Gannett employees about to join the Jilted Journalists ranks, the recent departure of a great top-ranking Los Angeles Times editor, and whatever else is coming down the pike, we're here to help each other.

Posted by Jilted Journalists at 11:15 AM No comments: