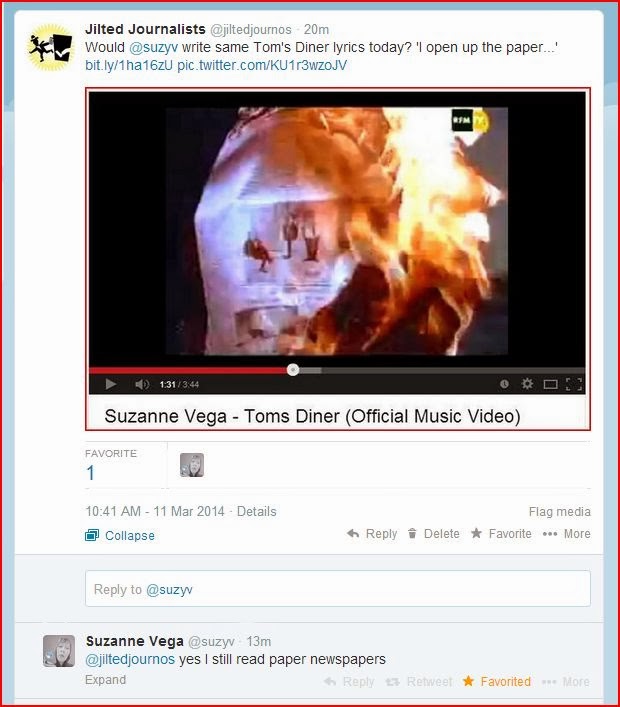 When Toms Diner came on the radio this morning, we wondered on Twitter if Suzanne Vega's lyrics about "I open up the paper..." would be different if she wrote the song today. Apparently not!

She tweeted this answer:
"yes I still read paper newspapers"

When asked later by media blogger Jim Romenesko which ones, she replied "Nytimes mostly."

BTW, Vega has a new album out: "Tales From the Realm of the Queen of Pentacles"
Details here: http://www.suzannevega.com/

... I open
Up the paper
There's a story
Of an actor


And I'm turning
To the horoscope
And looking
For the funnies ...
Posted by Jilted Journalists at 11:32 AM

Loan Opportunity Offered By Mr, Pedro That Save My Family From Financial Bondage

Hello Everyone, I am Putri Adiratnaa single mom from Jakarta, I would like to share this great testimony on how I got a loan from Mr, Pedro, when we were driven out of our home when I couldn't pay my bills anymore, After being scammed by various companies online and denied a loan from my bank and some other credit union I visited. My children were taken by foster care, I was all alone in the street. The day I shamefully walked into an old school mate who introduced me to Daisy Maureen. At first I told her that I am not ready to take any risk of requesting a loan online anymore, but she assured me that I will receive my loan from them. On a second thought, due to my homelessness I had to take a trial and applied for the loan, luckily for me I received a loan of $80,000.00 from Mr, Pedro. I'm happy I took the risk and applied for the loan. My kids have been given back to me and now I own a home and a business of my own. All thanks and gratitude goes to the help of Mr, Pedro for giving me a meaning to life when I had lost all hope. If you are currently seeking loan assistance, you can contact them via: { pedroloanss@gmail.com